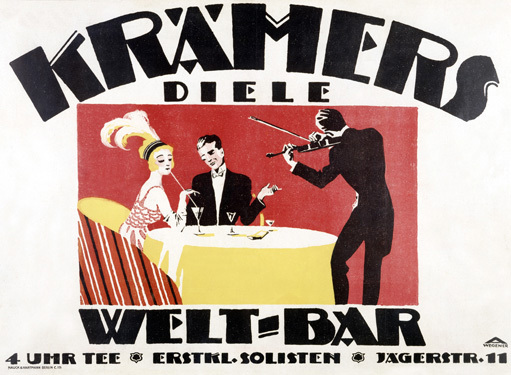 Telephones on the Tables

The ‘Resi’ was the nickname of a vast, luxurious dance-hall called The Residenz-Casino at Blumentrasse 10, just by Alexanderplatz. At various times in its history it has been known as Balhaus Resi, Tanzpalast Resi, Residenz Casino and just plain Resi.

It was built and opened in 1908 by Paul Baatz, but it was in the Weimar Period that the venue really came into its own.

The dance-floor was large enough for 1,000 people and it’s ceiling made from reflective glass. There were four bars, private rooms and even a carousel.

Above the dance floor were one hundred mirrored globes which opened and closed to the rhythm of the orchestra, and in 1928 a dancing water feature was installed. In the late 1920s the venue housed 86,000 electric lights!

Its most talked about feature were 200 private telephones fixed to tables and various stations around the venue, where customers could contact other tables or flirt anonymously with other patrons. Guests could also choose from a menu of 135 gift items and have them sent to other patrons via pneumatic delivery tubes (Rohrpoststation) suspended above the tables.

The venue closed just before the war in 1939, but was recreated in 1951 in Kreuzberg at Hasenheide 32, and was hugely popular with British and American servicemen and women. Once again, it featured the telephones on the tables, the rohrpoststation, and spectacular water shows created by Otto Przystawik, whose son Michael Przystawik still designs and installs water shows to clubs and venues around the world. The club also features in Ian McEwan’s 1990 novel The Innocent.

The venue closed in 1978 and the building demolished that same year.